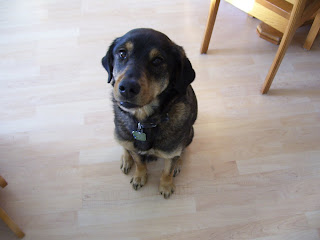 Darcy came to live with us in May 2006.  Kevin went canoeing for the weekend and when he returned Caitlin gave us Darcy as an anniversary gift.  Darcy's father was a rottweiler and her mother was a golden retriever.  We met the father, but not the mother.  I know that is a little backwards.  We named her Darcy because it means Dark One.  Alec has always called her Fluffy.  I have no idea why.  She is the least fluffy dog imaginable and she is so scrawny she isn't even fun to pet.  You wouldn't know she had rottwieler blood.  She and Shasta are the same length and height and Shasta weighs at least 15 pounds more.

Darcy is a good dog.  She is quiet.  She does not get on the furniture. She pulls on walks and is always on the lookout for squirrels but she is a breeze compared to Shasta.  She doesn't have issues with her halti, sewers or passing vehicles.  She can be a little food aggressive so we have to watch them when given a treat or toy.   This is strange because she doesn't actually like eating.  That is why she is scrawny.  When she was younger I tried every premium dog food trying to beef her up and nothing worked.  At least she finishes her food now.  If I throw her a treat, say a piece of broccoli, you can tell she is eating it just so Shasta won't get it.  She has a look of disgust on her face with every bite.  She is timid on her own and uncomfortable in new situations unless Shasta is with her.  She went to puppy kindergarden and agility as well but didn't really enjoy the sessions due to the other loud dogs, scary people and unfamiliar equipment.  She gets carsick due to anxiety so we have to be prepared when travelling with her.  She is good in the canoe - she just cowers under my seat.  We took Shasta canoeing once and that was enough.  She is good camping, again she stays at my feet because there are scary things in the dark.  As long as she is feeling secure, she loves being outside.  She bounds around like a deer. 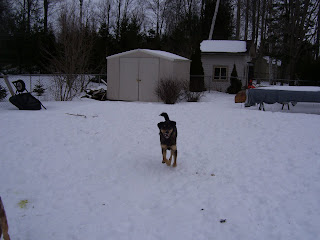 This is Darcy's favourite window to look out.  She watches the birds at the feeder for hours and if she is really lucky, a squirrel will come too. 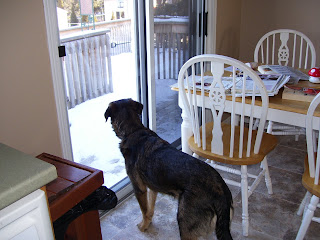 Darcy does not enjoy swimming or fetch.  Apparently she didn't inherit much from her mother either.   However, she is the one who initiates all the doggy play sessions.  Darcy is attention starved.  If you sit down she expects to be patted.  If you don't pat her enough and your legs are crossed, she will rub herself back and forth against your upper foot.  If you are swinging your foot and "kicking" her that is terrific.  One day I passed Caitlin's room and she was lying on her bed on her stomach with her feet hanging over.  Darcy was petting herself by rubbing back and forth against her feet.  I hope you have enjoyed learning about Darcy.
Posted by Lauras Garden at 7:31 AM

I think Darcy is more my type of dog than Shasta.

Nice of you to introduce them to us. I must say I read Darcy's more carefully than Shasta's... mean of me, but I just haven't warmed to Shasta when I've been there. It's probably the colour of her eyes. Some people don't warm to Whisper because of his eyes.

There's not too many that are fond of Shasta. Living with Shasta is like having a toddler going through the terrible twos - forever.