As I said in an earlier post, this has been a strange year in the gardens.  I have seen so many things I have never encountered before.  We found this beauty on Thursday.   After a lot of research I believe this one is arion lusitanicus.  I still have no idea if it is harmful or not here (as in should we destroy it if we find it again).  Unless I know something is harmful, I let it live.  But I don't pick it up - that is a co-worker. 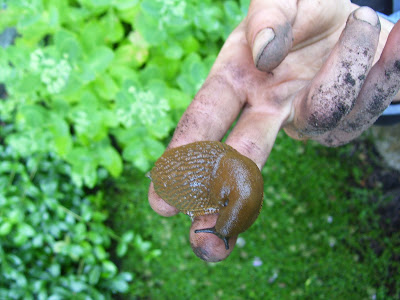 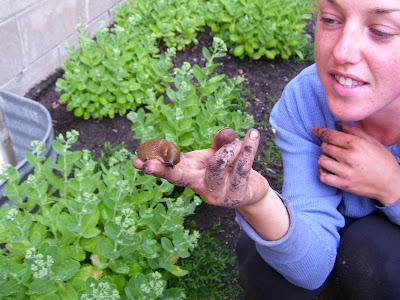 Maybe I should go back to the beginning of the gardening season and call it what a year! The spring started with odd things like finding 7 mice nests during spring cleanup (in the previous 3 years, I haven't found any), tons of deer droppings in the gardens (none before) and normally hardy plants that had a very rough winter. For instance, the rose of sharon bushes were half dead and half alive - literally a line drawn down the middle and the yuccas were all rotting (they came back from the roots later).
Then came the invasion of insects and weeds that we can't control. The insects -some of which are brand new this year and very little is known about them. (If anyone really cares they can look up lily leaf beetle, viburnum beetle and sawfly larvae but I won't bore you with details). We have been spraying plants all summer with varying amounts of success. Where natural controls are not effective we are removing the plants.
The weeds - In one particular garden we have been dealing with Creeping Bellflower for a year. It apparently takes 3 years to dig it out, it is resistant to herbicides and compounded by the fact it is also on the neighbouring golf course and next door and in her own patio and lawn. The absentee home owner is quite anxious to have her massive gardens weeded, mulched and some of the gardens removed and seeded. All of those take a long time to do - even the mulching which is normally a fast job is complicated by needing to lay down layers of cardboard or newspaper to slow down the bellflower - not stop it as its tenacious tubers can travel under and through driveways. This week she gave us an ultimatum - finish or else and we didn't finish - I figure at least another 3 days are neeeded. What we have done looks amazing but she isn't noticing that - just what isn't done.
Then I discovered Japanese Knotweeed - the godzilla of weeds. It can grow over 8 feet tall and looks like a tree. Since finding it for the first time in a new commercial contract this year we have tried digging it out without success. It grows a foot a week and the roots apparently can be 17 feet deep. Now for the lethal injection. A website suggested injecting each stem with weed killer. Kevin attached an inflating nozzle to a 60 ml syringe and that worked okay the first attempt but was too large and not quite sharp enough. It killed the growth above the injection site but didn't get down to the roots. I tried a smaller, sharper syringe with a real needle and that is when I stabbed myself. The stems are harder now and bent my inflater needle and blocked up the smaller syringe. So I told my boss I needed help. First time in 4 years and she had to come deal with 2 problem properties in one week! Then she asked my opinion on one she was having trouble with so I felt better.
I have spent countless hours of research into these problems this year. There are times when I want to go get a job where I don't have to think.
Sorry for the rambling explanation but now you know why I was using a needle as a gardening tool. And if anybody cares - I am not complaining about the cool summer. I much prefer it to working in 30 degree weather. We have only actually got seriously rained on 3 times so far.
Posted by Lauras Garden at 6:05 AM 4 comments:

Yesterday Kevin and I found ourselves all alone at dinnertime.  We recently got a new Harvey's and that is Kevin's favourite hamburger place so we went and used a coupon.  I don't really like onion rings but over the years I have gotten in the habit of eating one or two so I don't smell it on his breath.  This is my onion ring: 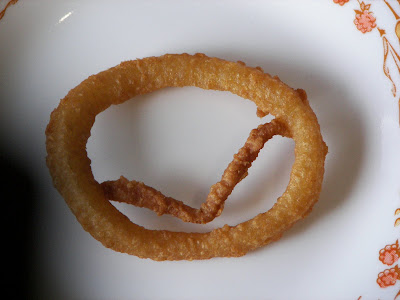 I immediately went 'That looks like the Mazda symbol".  Don't you think so too?

Then I started thinking of all the other roundish car insignias.  So fellow bloggers start watching your onion rings.  Maybe we can find

What do you think they'd be worth on E-bay?
Posted by Lauras Garden at 5:43 PM 5 comments:

Years ago I decided to make a name garden. In it I planted any plants that were named after members of my family. Hmm, maybe I should say plants that shared the same name as my family members -none of us are important enough to have a plant named after us personally. That extends to our last name - we have a Morning Light Maiden Grass and a Frosty Morn Sedum as well but they aren't in this picture. Shown below is my Miss Victoria daylily just starting to bloom, Alexander lysimachia (just peeking out from behind Miss Victoria) and the ground cover is Laura phlox. 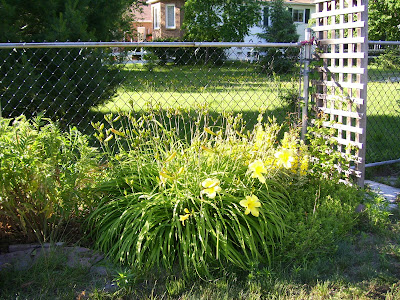 This is a close up of Alexander. I like the way the flowers emerge between the variegated leaves. And it looks good even when it's not blooming! 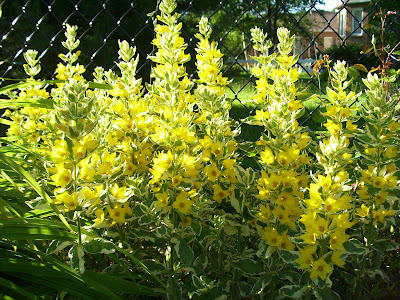 This wasn't really my name garden but I planted something today I wanted to share. It is a Charm Dianthus. Caitlin's rabbit Charm died last year and I couldn't resist buying it in remembrance of him. I bought it a few weeks ago but couldn't decide where to put it. The bloom is a tropical pink/coral and it was difficult to find somewhere it didn't clash. It has found it's new home in this bed with the Magnolia, that flowers before and a hydrangea that flowers after. 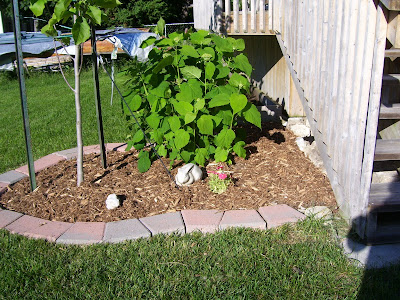 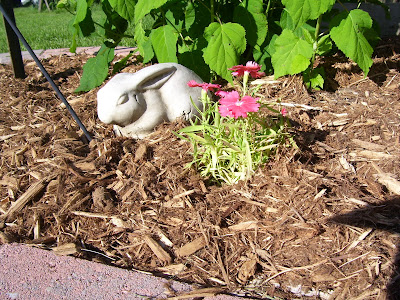 We got half of the gardens weeded and mulched today. Everything smells and looks so good!
Posted by Lauras Garden at 4:03 PM 3 comments:

Labels: Gardening, What is blooming

Wow!  This is my third blog today so make sure you keep scrolling down!  Alec sent us these pictures of his grad this week.  He hates it when I blog about him so I'm not sure why he sent them but I am grateful! He had the second highest overall mark so he didn't get top student (based on everything you do on course) 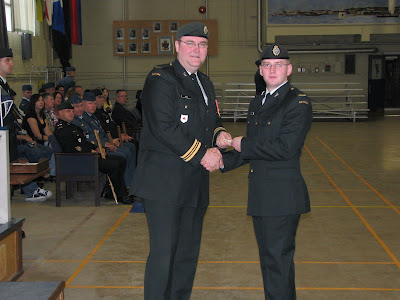 but he did receive the top academic award with a mark of 96%! 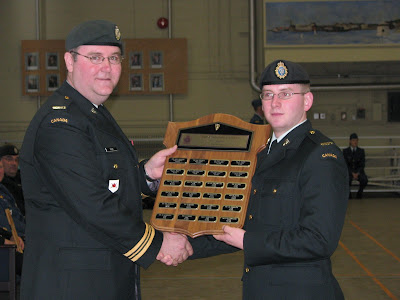 Connor has been busy

Two weeks ago Kevin and Connor went to Palmer's Rapids for whitewater canoeing.  This past weekend Kevin took Connor and his nephew Dalton back to Palmer's for a whitewater kayaking course.  Here are some pictures from the weekend. 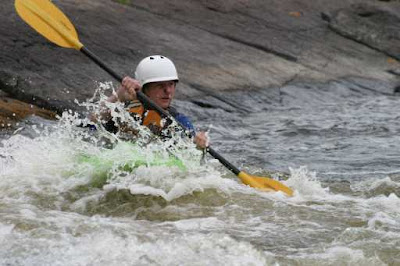 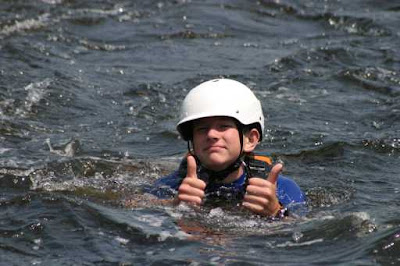 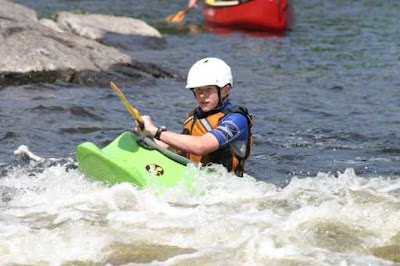 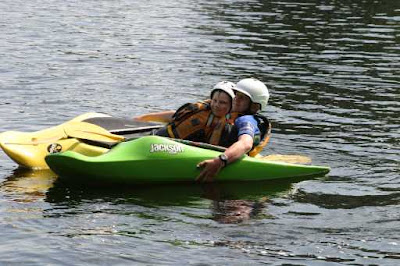 So Connor listed career choices at grad as kayak instructor or mechanic.  He may be well on his way.  He takes kayaking at summer camp and also takes canoeing and kayaking courses independently.  He has Level 1 and 2 kayaking from camp, ORCKA flatwater solo and tandem canoeing and River Runner Solo.  The whitewater course was not certifiable but considered the best introduction in the industry.  He bought his own kayak several years ago and now wants to upgrade to a high performance whitewater kayak.  He sure is my little daredevil - they called him Mr. Fearless at the course.
Posted by Lauras Garden at 9:39 AM 3 comments:

Some 40 years ago, Kevin's little brother Larry made this little kayak and kayaker for Kevin who was an active whitewater kayaker at the time.  It has travelled safely around the country with us and been displayed on a bookshelf in every home. 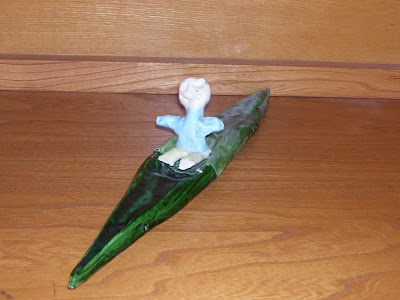 Just before school ended the McLaren Art Centre came to Connor's school and each of the graduating students was given a canvas to paint.  The artwork was displayed around the gym at graduation.  When I saw Connor's my first thought was that it looked like Larry's little kayaker.  Green kayak, little bald figure.   What do you think? 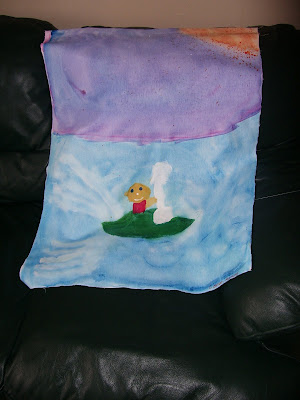