The greater the difficulty, the more glory in surmounting it ... Epicurus
(Greek philosopher born 341 BC)
This quote is relevant today because I am training for a new job as a supermarket food demonstrator to tide me over until the gardening season starts. They use a well known company for their secured operating system and it is a nightmare to get used to. Parts of the system don't operate in Google Chrome, only in Explorer so I am running into lots of glitches because I keep forgetting to switch. The company has just hired 4000 people as they are taking over sampling at a major chain and getting issues resolved is quite time consuming and extremely frustrating. I have just submitted my first timecard (with tech help). I feel quite victorious after completing the online training and timecard submission.
Posted by Lauras Garden at 6:21 AM 5 comments:

Another one I really like from Benjamin Franklin.
When the well's dry, we know the value of the water
Or in more recent terms
You don't know what you've got till it's gone ... Joni Mitchell (Big yellow Taxi)
Do we take our lifestyle and conveniences for granted? Do we appreciate how fortunate we are in Canada? We rarely have to worry about our "wells" running dry.
I just got back from skiing. The woods were picture perfect. But we are in for snow, freezing rain and colder temperatures later today.
Posted by Lauras Garden at 7:19 AM 1 comment:

I love quotes from people who have a way with words. I would love to be able to be more eloquent and to be able to sum up my feelings in such a concise way. For the last two years, I have sent out my weekly orders to my team with an inspirational quote. I have been thinking of sharing some of my favourite quotes for quite some time and got the final nudge from Fawn. Her post on quotes garnered a lot of feedback with many sharing their favourite quotes so I know I am not the only one who likes quotes. I doubt I can do a quote a day so I will share as I can. So ...
Plough deep while sluggards sleep ..... Benjamin Franklin
I chose this one because Ben was born on this day in 1706. Most of us know him as a great diplomat and statesman but he also was an inventor and gave us the lightning rod, bifocals, the Franklin Stove, the first odometer (for carriages) and the glass armonica (kind of cool - look it up) He was also responsible for the creation of the first public lending library and fire department in the States. If you have this months Reader's Digest, there was an article about his quest for betterment by studying 13 virtues. What a legacy he left!
I also picked this quote because I like it. The bible has many references, especially in Proverbs about the dangers of slothfulness. I wonder if any other religions warn against laziness? And remember Aesop's fable about the ant and the grasshopper? We have many slothful people still. Watching tv or surfing until the wee hours. Spending hours in coffee shops, shopping or in garages drinking beer. What do you think? How dangerous or evident is slothfulness today? Does the early bird really get the worm?
(excuse the change in font - I don't know why it changed mid post but I can't fix it)
Posted by Lauras Garden at 8:49 AM 1 comment:

In the fall of 2009 I found myself in need of new winter boots and I wanted new rubber boots too. After a little searching I discovered Bogs. They are made of neoprene and rubber so they are waterproof and warm well below zero. I love them. I have worn them to work and horseback riding, walking the dogs and shovelling snow and they slip on fast to pick Connor up at work. They come in 4 different heights from ankle to rider's. I love the funky choice of colours. Except for men's - they only get black or camouflage. I bought Tori a pair when I bought mine - they are great for the wet winters the Maritimes get. Kevin got his very recently. Shown below are mine, Tori's and Kevin's. 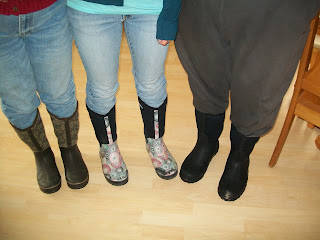 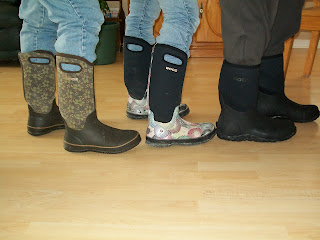 So now I really only need one pair of boots. The problem is I would like a different height and a different colour. Oh well. If anyone is looking for new footwear look for Bogs.
Posted by Lauras Garden at 4:17 PM 4 comments:

For Christmas I received this from Alec. And just what is it?
It is amazing.
It is so simple.
And so healthy.
It is a Biosta sprouter.
You simply put the seeds in a tray and water them once or twice a day. The little red siphon pumps move the water to the bottom tray where you discard it next time you need to water it. There are many kinds of seeds available. Shown below are Crunchy Bean Mix and Alfalfa seeds. 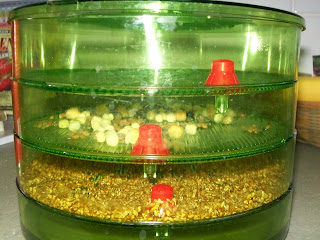 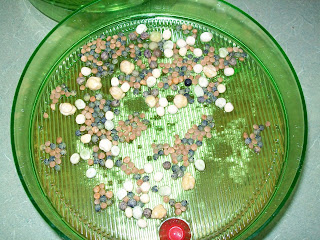 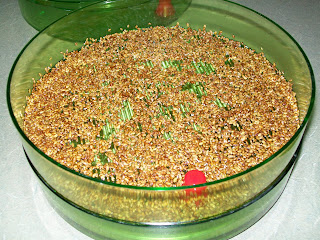 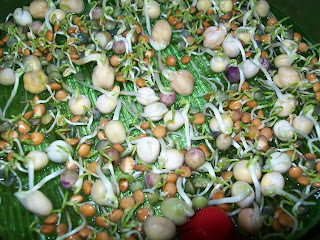 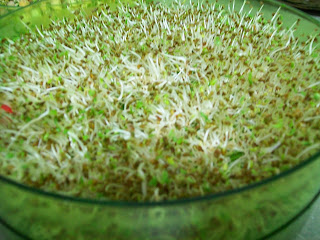 In the last two weeks we have had sprouts on sandwiches and salads. The Crunchy Bean Mix was a delicious addition to spinach salad. These ones are destined to be added to rice. Yummy. The possibilities are endless.
And I get a gardening fix in the winter.
Posted by Lauras Garden at 3:06 PM 3 comments: