While my to do list is progressing slowly (complicated by severe vertigo this morning), Kevin's plans have had to be changed.

He spent the better part of a year planning his trip.  It was to be a week of adventure in the northern lakes, the highlight a visit to the castle at White Otter Lake.  He emailed and researched and emailed more and bought a satellite phone and researched and printed and emailed ...  The original 12 dropped to 6 (Kevin, Caitlin, Connor, Dalton and senior friends Don and Bryan).  The satellite phone worked fine in the spring when he trialed it while walking the dogs in our neighbourhood.  But  he has had a lot of difficulty this last week.  It won't sync to his phone anymore so no two way communication.  It took many calls to the support centre from home and on the way up to get a sat phone that works occasionally and is not as detailed .   Often no  town names or roads are shown so their location comes to me as a red dot in a green forest, sometimes a red dot in a green forest with a blue lake beside.  Not incredibly useful.  They hit the water Saturday morning and were back at the put in Sunday afternoon (with their vehicles at the take out).  One of the first portages was not passable.  It was 900 m of bog up to their calves in spots and much of it blocked by a fallen tree.  I was so disappointed he wouldn't get to see the castle after all that planning.  They looked into Zodiac rides but ended up taking a float plane and had a great time.  Dalton sent me the picture below. Kevin says "The size of it in the middle of nowhere".  Cell phone coverage is spotty . 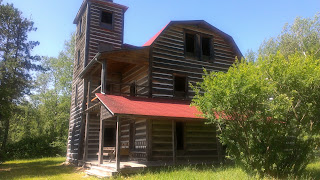 I believe they are at Sandbar Provincial Park now.  Their plans change minute by minute.  How did we survive without cell phones?  People used to holiday across the country and you wouldn't hear from them for 2 or 3 weeks, unless they sent you a post card.  Now we (I?) worry if a few hours go by.  Strange just as I finished typing this I got a message from Connor that they are leaving Sandbar.  He hasn't had cell coverage since leaving Thunder Bay 4 days ago!  And Kevin called right after.  They are going to Neys.


Posted by Lauras Garden at 8:55 AM No comments: