On Saturday we did some errands in Barrie on our way to visit my family.  My sister was up for the weekend from her home in New York.  My sister and her husband and Kevin and I enjoyed an early dinner at The Keg while the kids had hotdogs with Grandma and Grandpaw and other assorted family members.  After we returned we played kid's charades.  I was impressed with my youngest niece's ability to imitate a fuzzy caterpillar and a skunk.  It never occurred to me to take pictures.

Sunday afternoon Kevin, Connor and I finally got to go snowshoeing.  The weather was beautiful but it was getting dark so we could only stay out for about 45 minutes.  It snowed the night before so everything was quite pretty and there were lots of deer tracks. 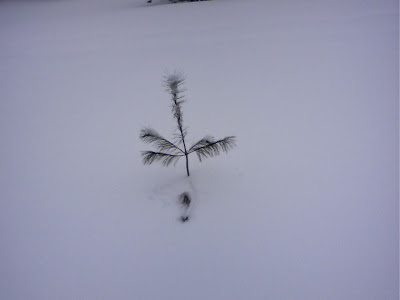 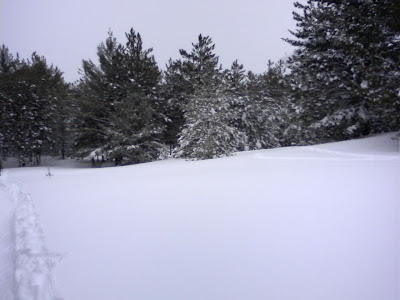 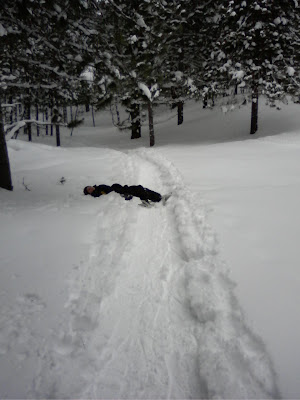 I don't think Connor actually fell in the above picture.  He just likes to fall in the snow.  For those of you who are critiquing snowshoeing apparel he was wearing his new hydration pack with all the tags still attached.  I think everyone else who had snowshoed through had the new snowshoes.  The trail wasn't quite wide enough for our old big ones.

For those of you who snowshoe alone or with mature company I can tell you it is quite different snowshoeing with boys.  They delight in ambushing each other by knocking snow off the overhanging branches and racing each other.

A picture of me below.  Kevin has an awful time getting a picture of me with my eyes open so this was pretty good.  He took the photos with his new cell phone so I had to wait until he was home to blog them. This is my work coat and I haven't worn it since I washed it in November - that is why all the zippers are undone. 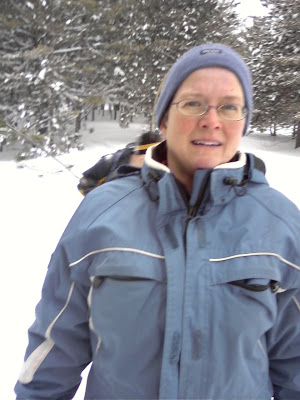 Posted by Lauras Garden at 5:58 AM

Connor is such a character.... leaving the tags on his camelback. Too funny.

On your advise I'll avoid snowshoeing with young people. Snow down the neck isn't really comfortable.

Looks like you all had a blast .... you haven't changed since you were on Vero Beach!

It looks awesome, fresh powder is so nice track through. John and I were out the other night for forest snowshoeing. I did take my headlight, but the rules wsere I couldn't use it. John can see perfectly at night, but I really struggle and my glasses were fogging up as well which didn't help. We were out for about 1/2 hour and what a blast.