Today we woke up to find it was a snow day and everything was closed - schools and day cares included. I don't remember them doing that here before. It didn't look bad from the window. Everything was picture perfect - especially the trees. When I stepped out the front door I discovered the snow was over my knees. I shovelled for 1 1/2 hours, Kevin shovelled for about 2 hours and the youngest two kids eventually got out of bed and shovelled for an hour. A nice neighbour with a snow blower finished the bottom after the plow came.

It would appear that a few of our neighbours tried to drive out of their garages without listening to the radio. They got stuck. Couldn't go back into the garage without shovelling. Definitely couldn't go back any further. 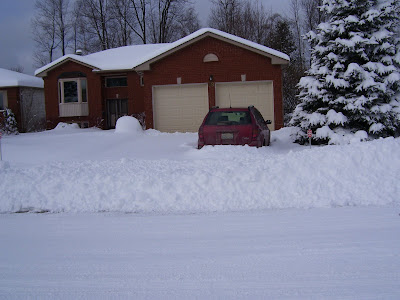 When the kids were done shovelling they stayed outside and played for a while. First they jumped from my truck into the snowbank. Connor is the black head you can see at the base of the tree. 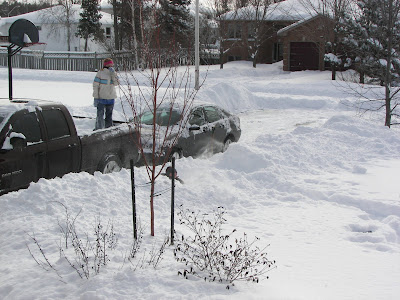 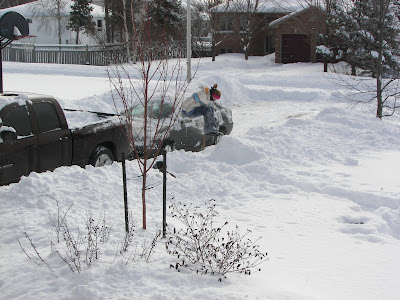 Then they came in and got dry clothes on. Then on to the back yard to jump from the deck into the snow below. Sorry no picture of that. They had a great time. It turned out to be a beautiful day - bright and clear.

I noticed that the snowplow had gone by one of the neighbouring courts and left a chest high wall of snow blocking the whole entrance. I got my camera and went back to get a shot. Some idiot in a little Honda had decided he could drive through it. Guess what - he didn't make it. There were 4 other people digging him out. I decided not to take a picture of that though it was very tempting to send it to the local paper. At 5 pm the radio announced there were still areas of the town waiting to be plowed! It wasn't really a lot of snow but it fell quickly - all between 11 pm and 6 am. Normally that much is spread out over a longer period of time.
Posted by Lauras Garden at 3:28 PM

I love it! What fun, people getting stuck coming out of their garage.

S. Ont snow is so wet and heavy, you guys must have got quite a workout.