We covered 645 km today. A few things slowed us down. It was very foggy for the first hour. Then we decided to go see the world's longest freshwater boardwalk in Coeur d'Alene, Idaho. Coeur d'Alene is rated as one of the 5 prettiest lakes in North America and CAA called the boardwalk a gem and mentioned osprey and bald eagles. We expected a nature walk. This is what we found - see that blue building on a boardwalk surrounding the marina. Very disappointing. The most interesting part was that the water inside the boardwalk is much calmer than the outside because of the skirting underneath. 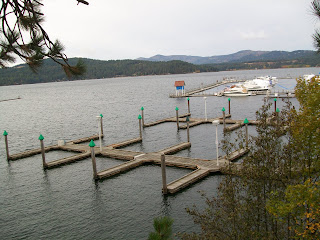 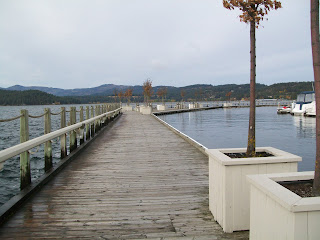 We stopped at a big silver store/casino/restaurant because Caitlin broke an earring and lost an earring last night but we didn't find any hoops. The scenery and fall colours continued to be breathtaking. And we saw 6 deer - 3 of them were even alive! 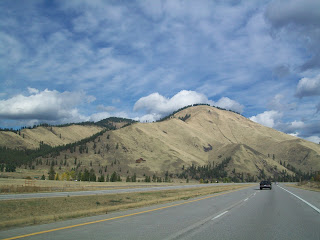 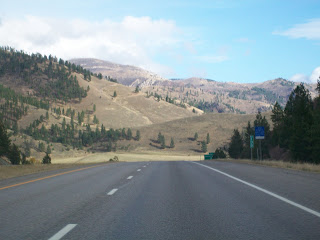 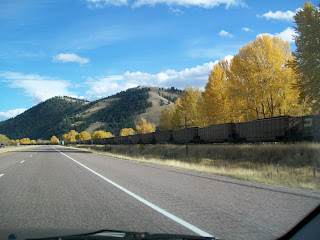 We wish we had gone here instead of the boardwalk. We always seem to be too early or too late for the attractions we want. Tomorrow - who knows.
And yes, we finished the whole pie.
Travel joke of the day:
A man was driving down a dirt road and got bogged down in an unexpectedly muddy hole. After a few minutes a farmer arrived with his tractor and offered to pull him out for only $25. After the car was back on dry ground, the man said to the farmer "At that price, you're probably pulling vehicles out of the mud day and night".
"Naw, I can't at night", answered the farmer.
"That's when I haul water to the hole"
Posted by Lauras Garden at 8:01 PM

Watch out for water holes. LOL