We live on a corner. Every time I came in this morning I didn't even have time to get my boots off before another vehicle was stuck in the intersection. Believe me it was tempting just to leave them there since the police were telling everyone to stay off the roads and no plows had been through. That was because the plow was stuck down the road.
Usually one vehicle would get stuck, block the others and before you knew it there was a real mess. There were 4 other vehicles stuck within a few driveways at the same time I took the shot below. 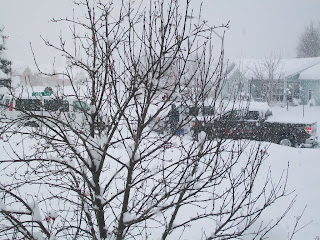 This little car was stuck down the road when the first picture was taken. After he was freed he tried to turn when we were all yelling for him to keep going straight. We had freed the burgundy Ford by this point but he could only go a few cars lengths because another vehicle was stuck a few driveways down. The Ford was blocking the road to the right so I have no idea where this man was trying to go. You can still see the hood of the white van. He was there for well over an hour before being snowblowed out. 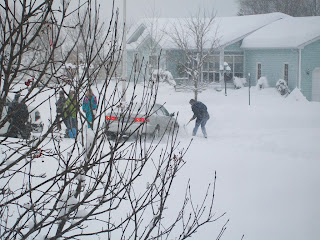 Then a bus got stuck. Why the bus was on the road on a snow day in the first place was beyond me. This contractor's truck tried to push the bus to no avail. Connor and Marcus and another stopped driver pushed the truck back, then they all pushed the bus forward. The truck got out on it's own as did the other two vehicles shown in the bottom picture. 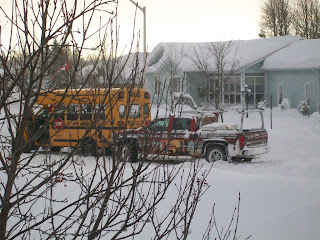 Usually I have "fairweather" neighbours (I don't see them from first snow until spring thaw) but this storm brought everyone out to help. David across the road blew out our driveway. Then we freed 20 or more vehicles. The contractor (I don't know him as he has only lived here a short time) went to the gas station to pick up some gas for an elderly neighbour's snow blower. People gave each other sand, shovels and gloves as needed. I really was appreciative of the way everyone worked together.
Posted by Lauras Garden at 1:54 PM

adversity brings out the community spirit. Good for your neighbours and you guys.

Everyone had stories to tell. Nobody shares the "run of the mill" day over a drink. It's no fun.