When we were on our hike down to the Whirlpool in Niagara Falls last week, we did considerable cleaning up of things that had washed up over the winter.  Connor brought back 14 assorted foam, tennis and hockey balls and a large fishing bobber.  Victoria brought back some empty bottles for her collection.  Kevin got a kiddie's inflatable ball (he uses them for something do do with canoeing).  Caitlin got a sunburn.  None of us were willing to carry up the10 pin bowling ball.  I brought this back. 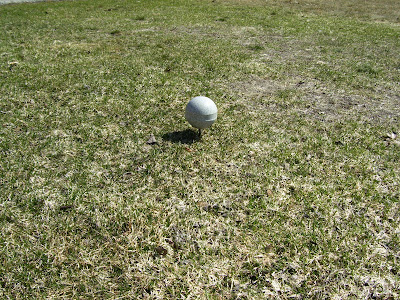 There appears to be a a space for a band of some sort around the middle.  Someone told us they thought it was a marker for a golf course but since we don't golf we don't know.  There is a golf course up the 300 steps and across the road so it is highly likely.  Anybody know for sure?

While raking the lawn today I found the poor creature below.  Yup - he is dead.  I was going to include him as a what is it but I know for sure what it is now.  I couldn't decide if he was a bearded dragon or an iguana but another neighbour knew who he belonged to and went to get the owner.   Buddy the bearded dragon escaped last summer.  They apparently searched for him for hours. 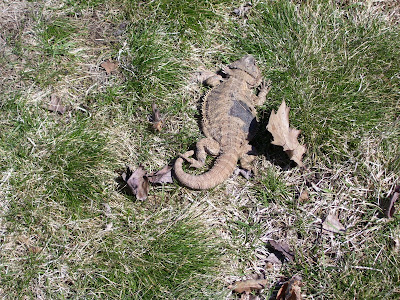 I should have known where he belonged.  Everything they lose ends up at our house.  Over the years we have rescued their sun shelter (which the husband denied was his for days), 3 of their dogs that somehow got out and now this.  How he "escaped" is beyond me.  But I know where to go for sure next time something strange shows up at my house.
Posted by Lauras Garden at 1:35 PM

How did he ever escape?

As for the weird thingie, I have no idea. Any golfers in the family?

Poor Buddy. How do you find a bearded dragon when it gets loose? Where do you begin to look?

I love the 10 pin bowling ball, I wonder where it came from.

Have no clue about the mystery object.

How big is it and what is it made of (looks like styrofoam)? (That would be the mystery object, not to poor lizard.)

It looks like plastic. It is a bit bigger than a large grapefruit. There is a 4 - 6 inch metal spike on the bottom (it is outside covered in snow now and I am not going to check for exact length) and there is another hole in the bottom.