Connor's Room - after the flood 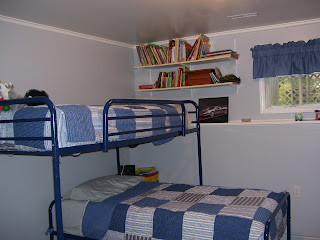 For those of you who have been anxiously waiting for the after pictures - here they are.  Our computer was not working so I went out and bought myself a new laptop and I couldn't get it to read the  SD card.  After 3 attempts I gave up.  Tori popped it in tonight and it worked - figures.

So here is Connor's room now.  The walls are gray to match the majority of his car pictures.  The floor is light laminate.  He is away at Air Cadet Camp for 2 weeks.  It will never look this clean again.  I even repainted the bunk beds!  They used to be royal blue - the picture isn't great but they are navy now. 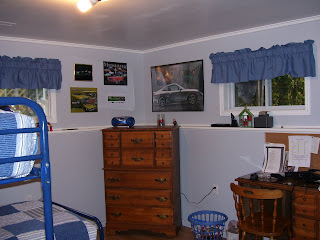 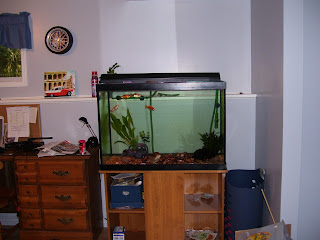 The above picture shows Connor's fish.  He wanted a kitten and I said no so he went shopping last year with a friend at our brand new Wal-Mart.  He came home with 4 comets in a bowl.  They were a bargain at 18 cents each.  I said "you know that bike you wanted for your birthday next month - it just turned into an aquarium".  That was a 10 gallon.  They outgrew that in 9 months so this is their new home - 65 gallons.  His bargain fish have cost me $800 - and cost him a new bike 2 birthdays in a row (he already has 3 bikes and a unicycle anyway).

Posted by Lauras Garden at 6:11 PM

Is that Caitlin's old room?

It looks great, you've done a really good job. You've got an eye for finishing work. (I'm not good at finishing, it's too labourious for my attention span... good job)

No. It was Alec's old room. I like painting - i just don't like doing so much at once.

Looks great. Will he keep it tidy?